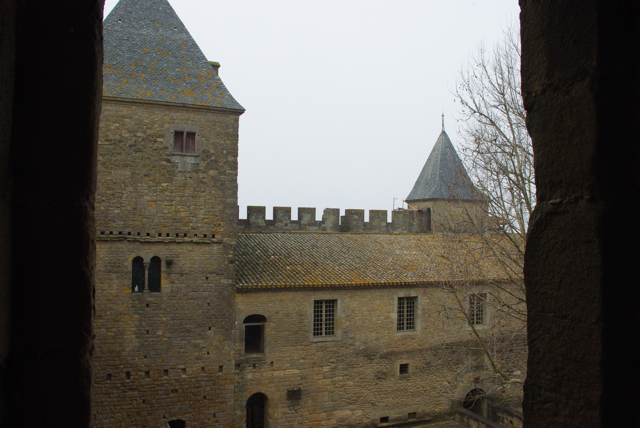 You might think that southern France is warm. Well. Take a look at that picture – does it look warm to you?

Taking a rudimentary glance at a map, I realized that we were not far from Carcassonne, a medieval walled city that I had learned about in French class in high school. At some point, the teachers decided that the best way to make us interested in learning French was to add a little bit of history and some pretty pictures into our classes. One thing that is so surreal being here is that I can remember learning about places and people in history classes or language classes, but now I have a chance to go see them or their environs firsthand. A lot of cool history happened in America, but things in Europe are just a bit more legendary. They are old. They have a bit of myth to them. 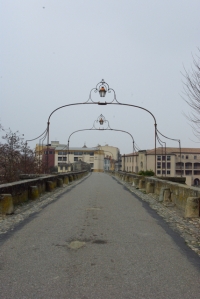 (This was true in Sweden as well, but unfortunately I never learned much about Sweden in school. So all of that was discovering new things for the first time, rather than feeling like I was walking into my own textbook.)

So, I said, let’s go to Carcassonne! It was not a well-hashed-out trip, more of a last-minute thing, like, we have this Sunday and we don’t have homework, let’s make the most of it. We looked and train and tram schedules, managed to all get to the train station at 9:30 (well not all, I’m looking at you, Katie), and get on the train. When we left our dormitory it was a bright blue day, sunny and beautiful. Not warm, of course not, but picture perfect.

At some point on the train, we began realizing that it was quite hazy outside. Maybe this happened around Narbonne. Visibility was low; we knew there were hills but we couldn’t see them. When we stepped off the train in Carcassonne, we realized that it wasn’t haze. It was a snowstorm, and it was zero degrees and blustery. I have to admit I think that our first instinct was to run back into the train station, but we were here – we had to carry on. We hadn’t looked up any directions or maps of the city, figuring that the walled city up on the hill would be visible from everywhere. Not today. We checked tourist signs and streetside maps as we felt our way around the city, hunkered down in our hats and mittens. 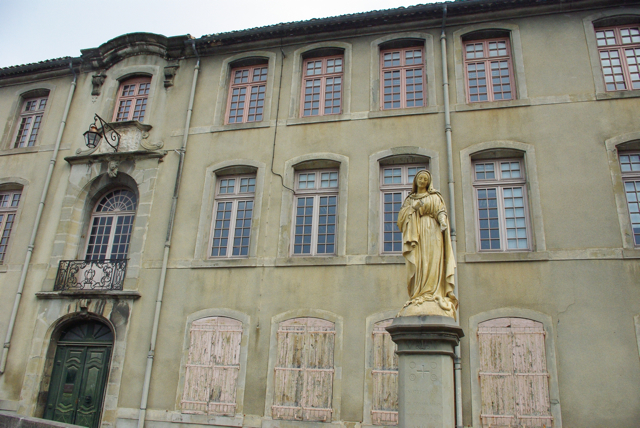 As we learned later, Carcassonne is really two cities. In the 1200’s, Carcassonne was a Cathar city. Despite a whole unit in a Dartmouth history class and a book read and assignment completed on Montaillou, where the heresy was really strong, I didn’t realize that the small hamlet lay just 90 kilometers from Carcassonne and that the powerful family that held the city were also Cathars. When the heretics were rooted out in southern France, the residents of the walled city were allowed to survive if they left their homes. So they went through the gates and eventually made their livelihoods down the hill, in a second city. That’s where we arrived by train. And it was quite pretty – nice shops and squares, monuments.

But at last we reached a bridge and could look up and see the castle. Yes, this is what we came for. (The wind on the bridge was something terrible.) 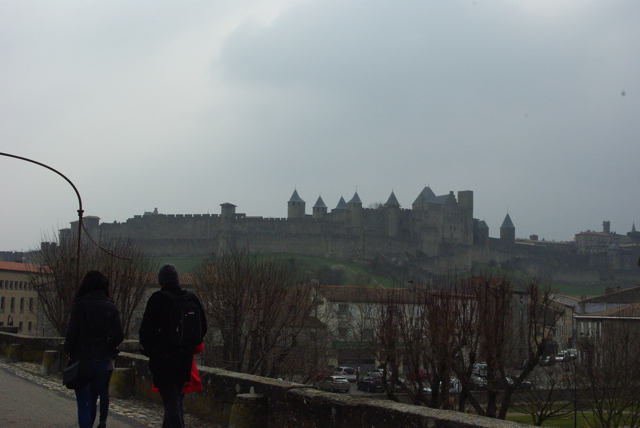 So up we climbed, up and up, to get to the UNESCO World Heritage Site that is Carcassonne. First, through the improbably green grassy hillside – the Mediterranean does get all its rain in the winter – and then up cobbled steps, behind walls and through arches. 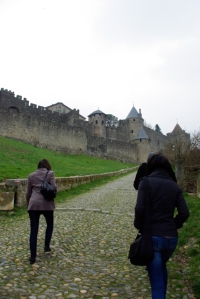 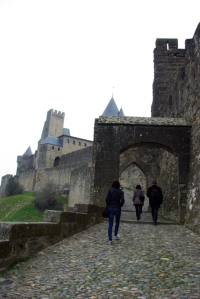 The most surprising thing once we got inside the city walls was to see…. life continue to go on. I hadn’t realized this, but the city is still a city. I guess I shouldn’t have been so shocked; after all, Fes-al-bali is a World Heritage Site and it’s very much alive. And the area is big enough that it would be a shame to turn it into a sterile museum. But nonetheless, I wasn’t prepared to walk through the last huge arch and see a restaurant. 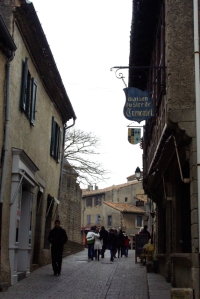 All of the establishments in the walled city cater to tourists. There are restaurants, cafes, coffeeshops, chocolate shops, kitschy souvenir shops. A few smallish museums of unclear provenance. I guess that people live there, but it wouldn’t be very convenient; the real world is down in the other city. There are hotels, but they must cost a fortune. Still it was strange to see so many people walking around, talking boisterously and popping in and out of buildings.

We were sorely tempted to eat lunch, but decided instead that we should at least look around before we ate. We wandered into the main museum, assuming that it would cost a lot of money, but it turned out to be free for students – hurrah! So in we went. The castle within the walled city itself was rebuilt, redesigned, and fortified through the years, so to begin we had to walk over the stone bridge over what used to be a moat – protecting the nobles from not only invaders but also providing some insulation from the townspeople themselves. These days, the moat is dry and they were beginning to plant vegetable gardens in the grass below the bridge.

Then under another arch, where you could see the old defences: there was where the portcullis would go down, there was a gap where something hot and painful might be poured on people passing under the gate. Then, we were inside the keep. 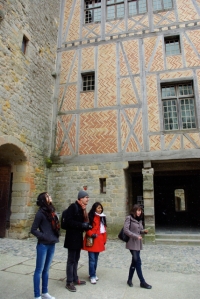 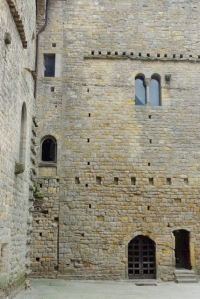 The museum took us inside, up the stairs, and into a dark but probably otherwise grand hall where we watched a video about the history of the city. It fell into disrepair and squatters lived in the free spaces until the mid 1800’s, when someone took an archeological interest in the site and began trying to decipher what it was supposed to look like. From that point on, restoration work was done to get the city into the shape it is in today – so that when you visit, you can imagine what life would be like.

As we walked through long halls, up and down winding stairs to scale towers, and out along the ramparts, we certainly imagined what it would be like. In a lot of ways, not that nice. For one: it was dark inside. For another: it was cold. A few rooms were sort of heated, or at least protected from the cold, but in others the windows did not have glass and we could hear the wind howling fiercely. It was scary, in a way, how it picked up speed along various rooflines and then flung itself down the sides of the high walls. I would have sworn there was a hurricane outside as the wind blew past us.

You would spend the winter cowering from the cold, locked up in this vast hulking stone castle, looking our the window with fear. At least that’s the sense I get. 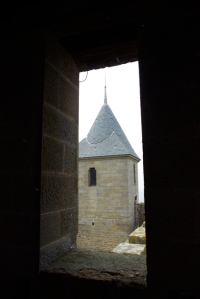 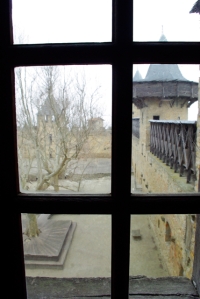 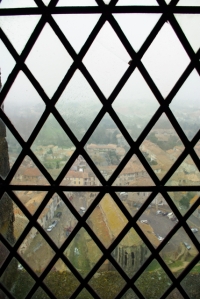 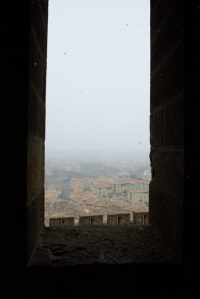 Eventually we made our way down to the lower rooms, which had been the chapel, receiving rooms, and other fancy spaces. They were more equipped for guests and for comfort – one had frescoes of horses and nights painted all around the top of the walls, and the ceiling was washed a bright blue color like the sky. In here, art from the city’s history was housed, and restored gargoyles and details from the tops of columns. All sorts of beautiful things; perhaps when the castle fell into disrepair, only the stones used in the structure were left. Maybe, back when people lived here, it wasn’t as cold and isolating as it felt to me. I can only hope.

Because, what I’m left with, even after a bowl of hot onion soup at a local restaurant, a nice trip to the ornate cathedral, and a train ride home to warmer Montpellier, is the memory of the snow flying around those cold stone walls. Supposedly, in the summer, it is unbearably hot; that wasn’t something my mind could even comprehend. Instead I was stuck thinking how lucky we are to live when we do, when life isn’t so hard, so painful, or so short.

But even despite those takeaway messages, despite the fact that our photos were not against the clear blue Mediterranean sky, the city was beautiful – and I felt more than ever lucky to be in a place where I could walk into the pages of my history books. The sheer scale of the walled city was astonishing, the number of turrets and towers, the tons upon tons upon tons of rock that had been summoned to defend the stronghold. Can something be harsh and lovely at the same time? I say yes – even as the snow flies. 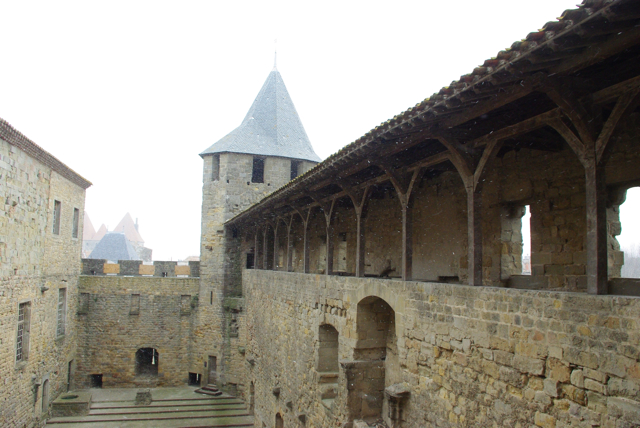 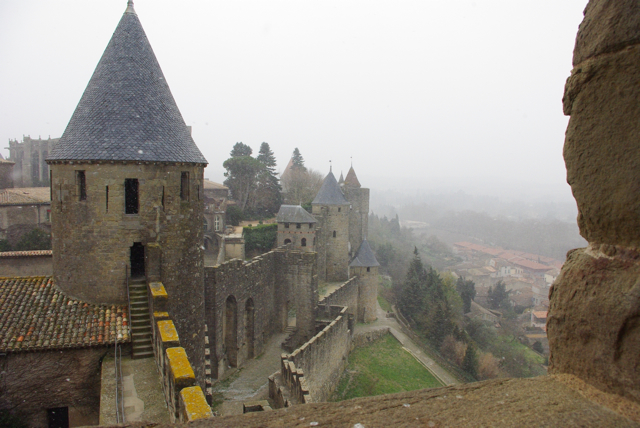