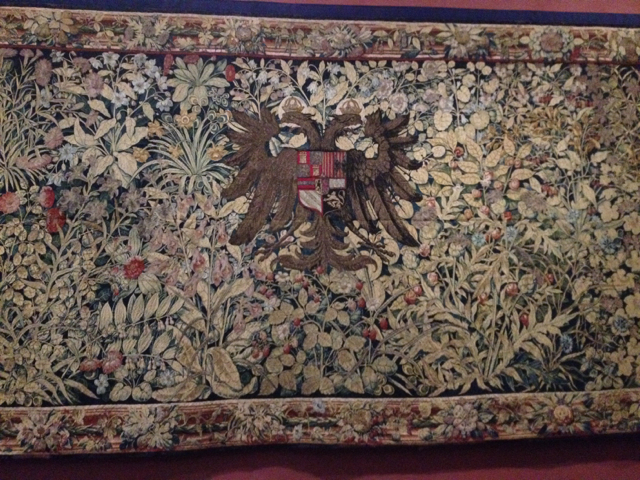 I realized shortly before my birthday that actually, I have not traveled much outside of Switzerland since arriving here. I suppose my masters was so travel-heavy that I was facing exploration-exhaustion by the time I started my PhD. So I went to Sweden for World Championships for a few days, to Tenerife for vacation, and that was it for my first nine months living in central Europe.

I think I was ready to rebegin. So I booked a plane ticket to Vienna, a city I had never been to and, frankly, didn’t have as many ideas about as probably I should have. I don’t remember much about the Austro-Hungarian empire from my middle-school history classes (and we certainly didn’t learn about them in high school, where history was hands-down the worst department of them all), and I had very little 20th-century history either. I guess the most I knew about Vienna came through music; after all, I played classical piano.

Unfortunately the 4th-of-July weekend in central Europe was smack in the middle of this horrendous heat wave, which is possibly the worst in the last 150 years depending on where you look. In Switzerland I think it’s still slightly behind the 2003 wave, but close; in Germany, the highest temperature ever recorded in the country was measured in Kitzingen.

So I didn’t end up spending a lot of time outside in Vienna. But a lot of time in museums with air conditioning. Here are some highlights of the trip. 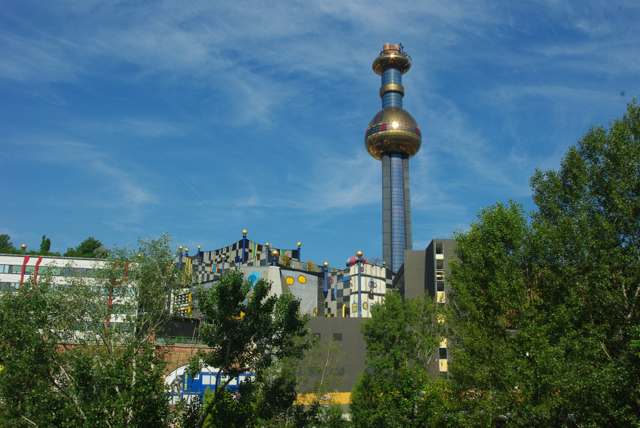 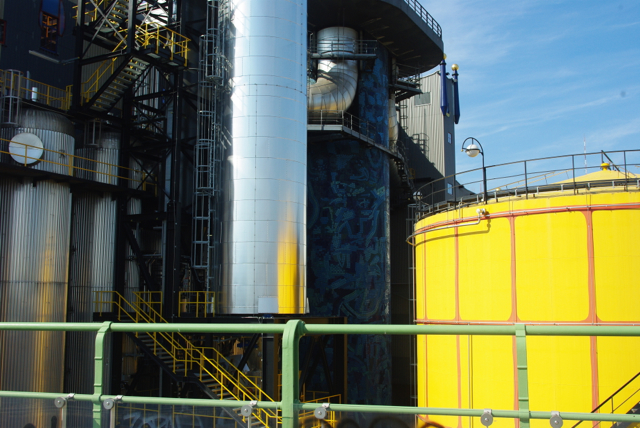 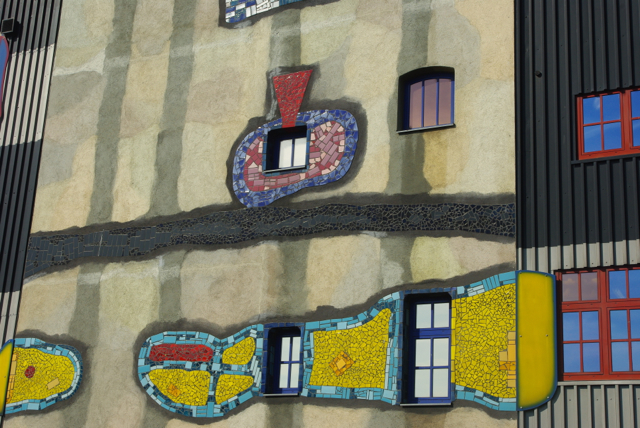 One of my favorite discoveries is something I wouldn’t have even known about if my friend Knut, who had spent a month living in Vienna this spring, hadn’t told me to look for it. Friedensreich Hundertwasser was an architect and artist, and several of his biggest public projects are in Vienna. Technically, he lived in Vienna most of his life, but the guy’s itinerary went around the world multiple times!

Above is the city’s hot water heating plant, designed by Hundertwasser. Imagine going to work there every day. Pretty cool. It was the first Hundertwasser site I saw, and I was hooked.

Later I went to the Hundertwasser museum, called the Kunst Haus Wien, housed in a building he designed with lots of tile and old planks on the floor and some trees growing inside. I saw some of the other art, including very, very cool paintings and prints. So much color, working with gold leaf, working creatively. Hundertwasser had a philosophy of sustainability and world peace through every part of life. That comes through in his art. 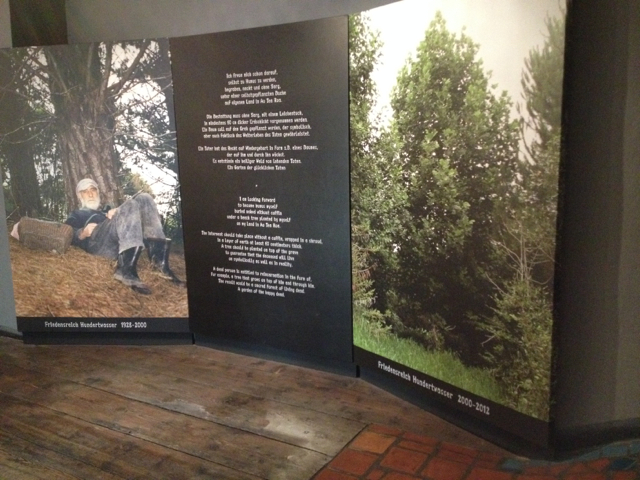 One of the first things I saw in the museum was a large poster. On one side was a tall photo of Hundertwasser: 1928-2000. On the other side was a photo of a tree: Hundertwasser 2000-2015. The artist was buried on his land in New Zealand and a tree was planted over his body. That tree grows on. It’s not a completely original idea, but it was so forceful to see the tree and the man placed right next to each other that it nearly bowled me over in its poeticism.

You can learn more about Hundertwasser on this website. 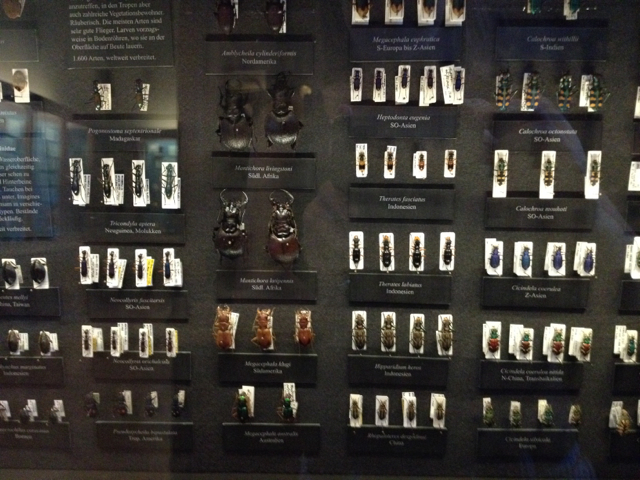 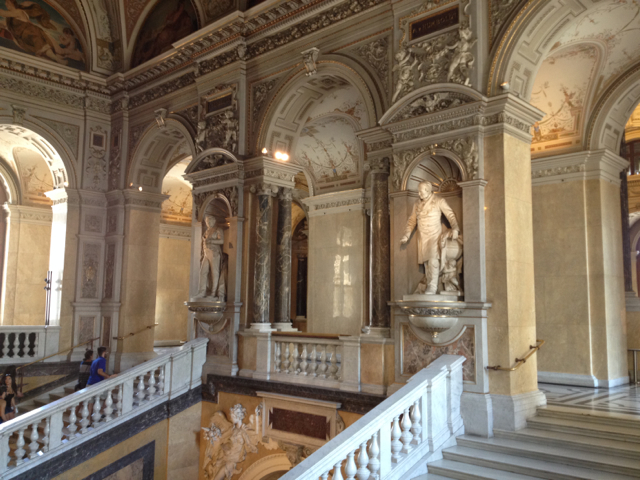 The Habsburg empire included a lot of men (and some women) who were extremely interested in science. As the empire grew, samples of plants, animals, and fossils were sent back to Europe; Austrians also explored by sea and land as the worldview of Europeans expanded. The collection in Vienna is, well, extensive. It encompasses more than 30 million objects.

In all science museums, the collection is actually much larger than what can be displayed. That’s of course true of Vienna’s natural history museum as well. But they do have a huge, ornate building to house the collection in, purpose-built to show off Austria’s treasures.

My housemate Geri suggested that I visit the museum, saying she could spend “days” there. I could as well. It was awesome. A few small notes, not necessarily my favorite things that I saw, but cute ones that photographed well: 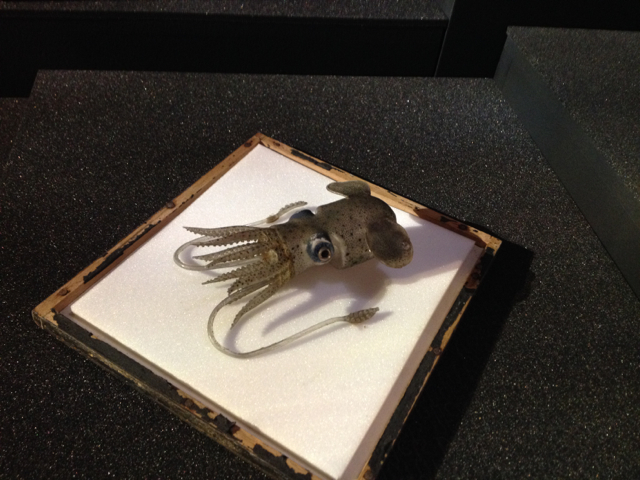 In a collection about the history of the Austrian university research system, there was a display of models of ocean creatures made out of glass. Yes, that’s right, glass. A team of incredibly talented glassblowers capitalized on the fact that translucent organisms don’t always look that cool when stored in alcohol, can’t be dried, and can be hard to draw. The results are incredible – and also accurate and informative. 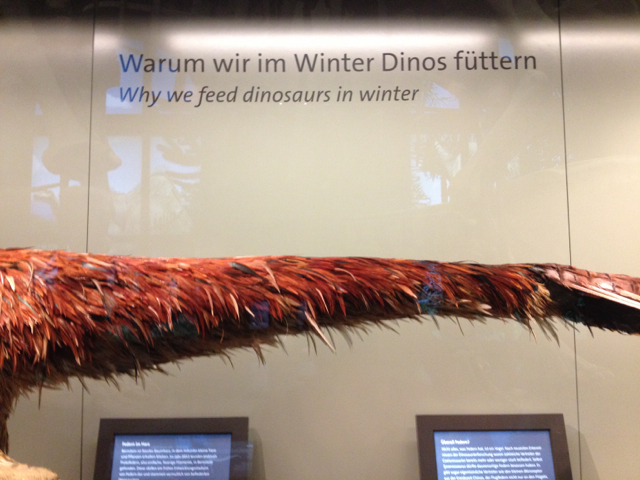 Finally, I always love the connection between birds and dinosaurs. It’s a fun one to make. Glad the curators capitalized on this. In the same exhibition room were some dinosaur fossils and skeletons and an animatronic dinosaur! Here’s a video (not by me).

3. A Special Exhibition. Also in the museum was a special exhibition of large-format black and white photographs of bison. Taken by Heidi and Hans-Jurgen Koch, a pair of German artist/photographers, they were paired with text and it was a revelation. At first it was strange to look and think about buffalo and learn from a pair of people who didn’t grow up with the same legends of the American west as I did. Can they possibly really get it? I was almost offended. But on the other hand, skipping some of the mythicism and the rewriting of history that always happens in our educational system. It was an amazing display.

You can see some of the photos in an online gallery from Der Spiegel. Although there’s something missing when you’re not looking at gorgeous prints in the flesh, so to speak, they are amazing.

You can buy the book of their work, called Buffalo Ballads, on Amazon. (It’s also at Powell’s, which I usually recommend, but it’s on backorder there. Still, here’s the page)

4. The Leopold. I went to a lot of museums. I really enjoyed the Leopold, which focuses in particular on Egon Schiele, an artist I was not familiar with. I liked his work, and also particularly liked the way it was presented: with lots and lots of context. The museum is based on an extensive private collection, and the building was built fairly recently so there’s lots of space. There are displays of Schiele’s personal correspondence, photos of different places he had lived, and information about his relationships and the culture in Vienna at the time.

There’s some other nice art from the early 20th century as well. 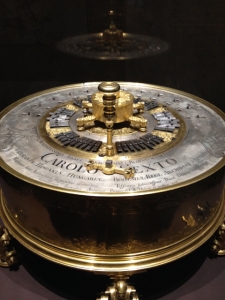 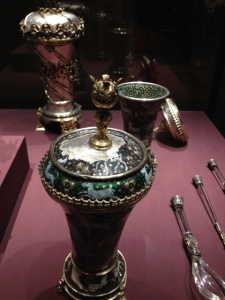 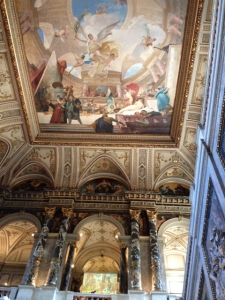 Just across the park from the natural history museum is an identical building which houses much of the Habsburgs’ art. The paintings are great; the architecture is amazing.

I spent more time, though, wandering around the Kunstkammer, rooms that housed collections of objects owned by the Hapsburgs. Some of it was straight-up art, procured by the royals or gifted to them. But a lot were not paintings. The top photo here is a calculator! A calculator. As mentioned, the Habsburgs really liked science, technology, and progress. There’s a great collection of clocks, navigational tools, and other nifty things. All gold-plated, of course.

And lots of dishes, table ornaments, jewelery, and other stuff. As I walked around, I kept thinking, wow. Those Habsburgs though. 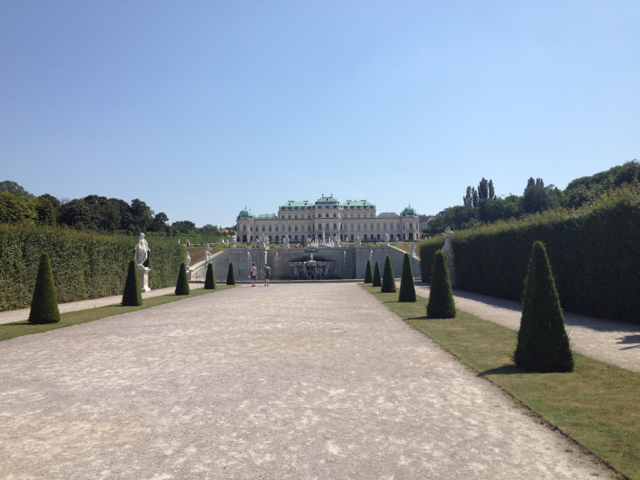 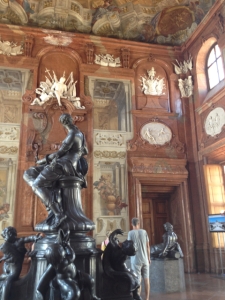 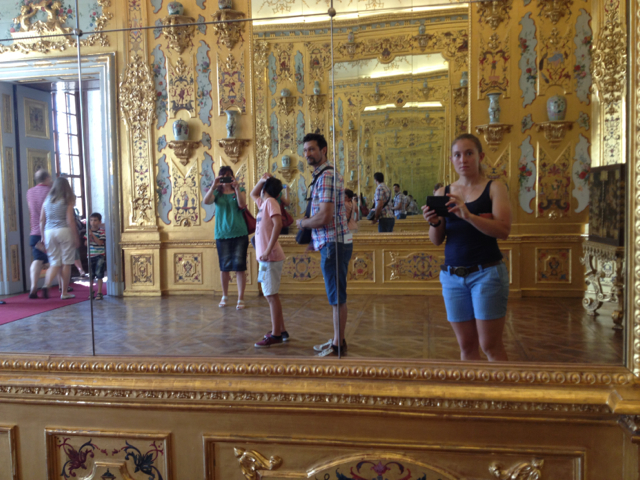 That feeling only continued when I went to the Belvedere Palace. Crazy, they were.

Also I really enjoyed the Gustav Klimt exhibit there, although I wish there had been more of it. It was advertised all over Vienna as “KLIMT AT THE BELVEDERE!” !!! WOOWW OMG !!!! But… I wanted it to keep going.

7. Wiener Schitzel. There’s much good Wiener schitzel to be had in Vienna. Have some. I found mine at Finkh, a great restaurant in an off-the-path location. I recommend it: besides the great schnitzel, I had a great seasonal summer salad with halloumi cheese and avocado, and they also had Augustiner beer, my favorite from Munich! I didn’t even need a reservation, even though it’s a small restaurant which was written up in the New York Times.

8. Running to the Danube 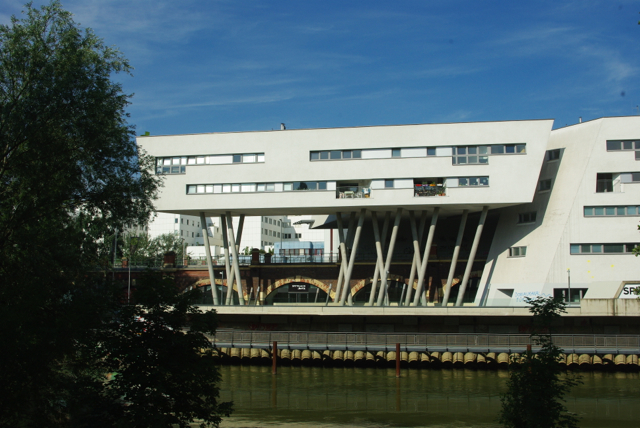 It was hot as hell. I didn’t run for the first two days I was there. On the last day, I steeled myself to do it. A canal runs through (ish) Vienna, but I really wanted to see the Danube River itself. So I ran a few kilometers out of the city to have a look. It was cool. There are nice paths along the canal to run or bike or rollerskate (yup, saw some of that). 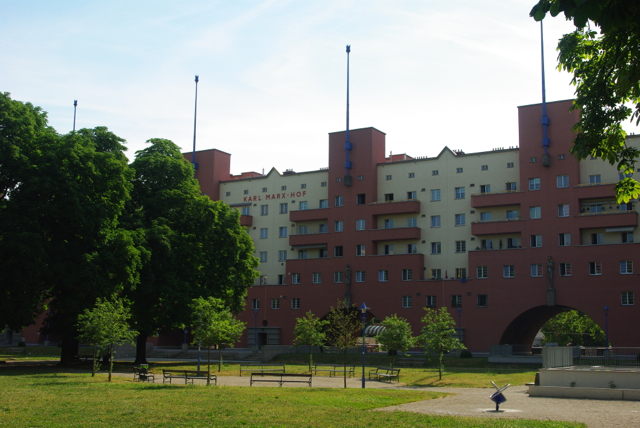 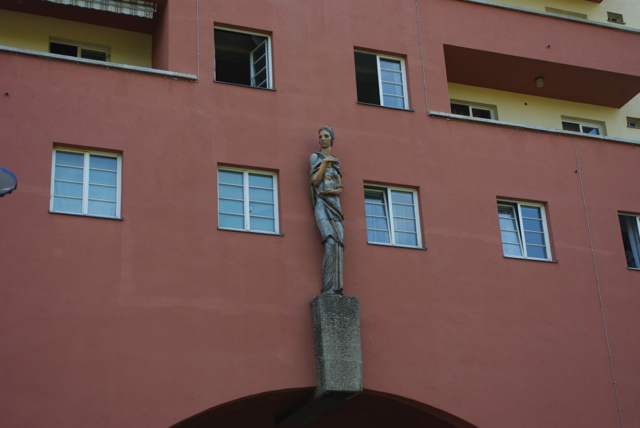 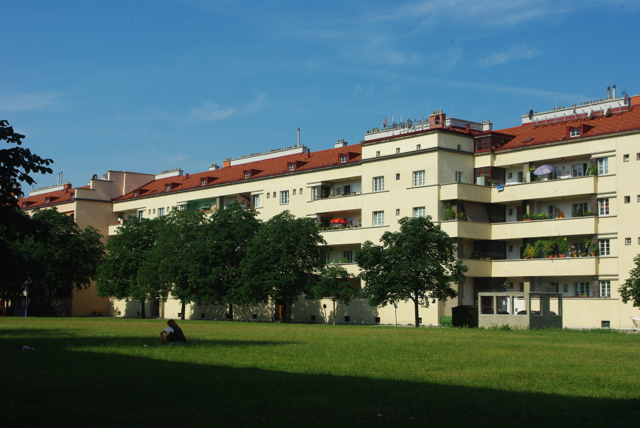 I started this list with some architecture, so I might as well end it with some, too. I went to take a look at the Karl Marx Hof, a massive socialist housing project from the 1930s. Seeing a few photos online, I wasn’t expecting to find it very interesting. After all, the idea of living in a building that stretches several blocks, continuously, all connected, gives me feelings of physical revulsion. I’m a country girl! That’s not my style!

But actually, the project was really cool. The interior parks and courts would be lovely places to spend time, and the people living in apartments had really embraced what could have been quite a sterile space. It seemed organic and quirky in a way that you would never expect if you looked only at the architectural plans.