The day you have all (?) been waiting for has arrived – I’m going to tell you about the great white north.

I made it to Finland, safe and sound, after about 29 hours of traveling. Yikes! I’m still very jet-lagged and having trouble sleeping at night, which means that I am not enjoying things as much as I otherwise would. I haven’t taken any great pictures yet, but here are a few mediocre ones so you can see what it’s like here.

We’re staying in a cute little cabin complex. We have two cabins, one for boys and one for girls. Our cabin has two rooms with two little twin beds each, and a living room/kitchen/dining room with a pullout couch that our coach sleeps on. The kitchen has only two burners and no oven, so cooking is interesting but hasn’t been a total bust. The boys made a delicious stir-fry last night and Dylan is planning to make stew this evening, so we definitely aren’t starving.

The first day we skied, there were only 3.8 kilometers open, but it was very good skiing. We were literally overjoyed to be on snow and probably zipped around a little faster than we should have, just due to the exuberance of the situation. Skiing in late October is unheard of in all but a few places in North America, and even in those places, it certainly isn’t reliable. Here we were on well-groomed trails, doing real skiing! It is still unbelievable. 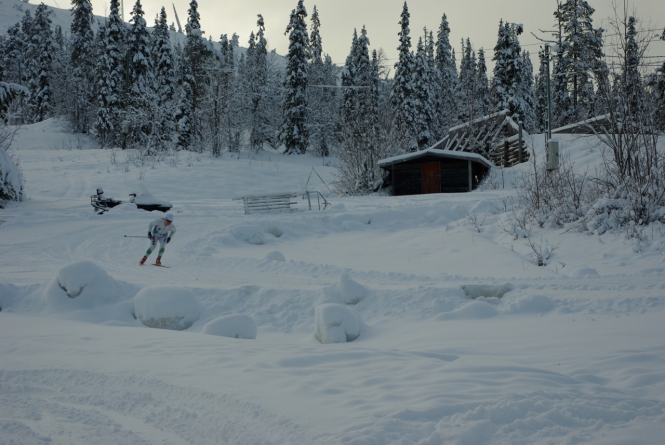 It snowed for much of the last 24 hours and there were a lot more trails open this morning. This was a relief because pretty much all of our skis have been 2 hours long and doing so many little laps gets a bit boring. Today I got sick of skiing around the short, well-groomed loop with a hundred other people, so I struck out up the hill and ended up skiing along the top of the ridge below some windmills. I had a beautiful view of the countryside, which is comprised entirely of wooded hills and a few lakes. No mountains, just hills. Even at noon, the sun hangs in the corner of the sky, casting everything in a pinkish yellowish glow. I was psyched to be up on the hill with no other skiers around, enjoying the view, even if it meant skiing in some ungroomed powder.

It is a little stressful to ski here – there are so many people, with skiers from Finland (of course), Russia, Sweden, Belarus, Estonia, the Ukraine, and God knows where else. I am constantly getting passed by people who are faster than me, and the Russian coaches have a disconcerting habit of wordlessly staring at you when you ski past them. Being off on my own was so much more relaxing – I could think only about myself, what pace I ought to be going, and not worry about everything going on around me.

At this point, we are very much in training camp mode, doing a not-insignificant amount of volume. In between sessions we only have the time and energy to do things like read and knit. During our jogs around town we have found some cool stuff, though, so here’s a bit about Muonio.

There are two grocery stores, called S-Market and K-Market. Both stores count yarn and canned reindeer meat, and thermal underwear among their wares. S-Market is my favorite, perhaps because it is a little bit more light and seems to have a slightly better selection. The other one, Pepa refers to as K-Mart, which is funny because it doesn’t sell appliances, clothes, or plastic crap like the American chain. The boys theorize that S-Market and K-Market are owned by competing families a la Mantagues and Capulets, except that because we are so far north, the feud is progressing very slowly.

We also found a thrift store which we intend to hit up next week. We were running along, arbitrarily deciding what all the buildings we saw were – Finnish doesn’t have much in common with any language I’ve studied, so the names weren’t much help. For instance, one building we decided was a nursing home because it just felt right. Then Lauren said, “I bet that one is a thrift store!” Yeah, right. How likely is that? We ran up to the door and under the hours, in English, it said “Secondhand Shop.” Wow!

We ran by a number of bus stops, which I thought was really cool since the town isn’t even very big (about 2,000 people), but yesterday I realized that I hadn’t seen a single bus, so public transportation might not be a reality after all. Very confusing.

The river is quite beautiful and full of swans, both white and black. The whole setting is very picturesque; it’s too far in the middle of nowhere, but other than that, I could see Lapland getting a lot of tourism.

That’s all for now. Hopefully I’ll get some better pictures up soon!

Today we hiked/ran from Squaw Valley to Donner Pass. Beautiful!

When people ask me what it means to be a green ski team, I sometimes struggle to answer. We haven’t changed the world (yet). But we’ve done a few things, we’ve tried to do a few more things, and we organized the Team 350 Challenge.

The idea of the challenge was to get people to think. Our earth’s atmosphere currently has 387 parts per million of carbon dioxide floating around in it. In order to avoid catastrophic environmental effects – which, more than just wrecking the “environment”, which a lot of people don’t really care about, would wreck people’s lives – this level should drop below 350 parts per million. One of these catastrophes is that there would be no snow, and we’d be out of luck for skiing.

We challenged our community, along with the rowing community, to cumulatively train 350 million meters over the course of a month. While our goal was to get as many people signed on as possible, and to log as many meters as we could, I imagined that if 1,000 people each logged 350 thousand meters (350 kilometers), we’d reach our goal. That’s not much more than 10 kilometers per day. There is quite a large number of athletes out there who train that much or more.

While the Team 350 Challenge doesn’t include any specific action to lower the amount of carbon dioxide in the atmosphere, each person that signs onto the challenge is aware of the issue. If we could get athletes to think about climate change as they logged their meters online, surely we could make a difference, or at least a statement.

As I write this, nearly 1,500 people have taken up the challenge. Among the names on the honor boards are Green Mountain Valley School coach Justin Beckwith and his team; NCAA All-Americans Rosie Brennan, Susan Dunklee, and Caitlin Patterson; and, of course, all the members of our team. Nearly 100 athletes have completed 350 kilometers of training.

Regardless of the fact that we will not reach our goal, we have reached out to a significant number of people. And this ties back into our goal, into my answer to the first question, into what makes us a “green” racing team. Although acting is undeniably better than thinking, at the very least, our goal is to raise awareness about sustainability issues.

Tim sometimes refers to “the hypocrisy of being a green ski racer.” We will never be a zero-waste, zero-emissions team. It’s not possible. You can’t walk to every race on your own two feet. You can’t train at altitude in Vermont – hence we’re in Lake Tahoe right now.

But we can do as much as we can make sure we are not wasting resources unnecessarily, and to make sure that our competitors are aware of their own effect on the environment. We can do our workouts from our house whenever possible instead of driving somewhere. We can eat as much local food as possible. We can write letters to our legislators and politicians and try to make sure that the Copenhagen negotiations are fruitful.

There is a lot of buzz around 350 right now. We hope that you’re paying attention to what so many people are saying – thanks Andrew Gardner, thanks Steinbock, thanks Sara Renner, thanks to so many others – and we hope you continue to think about it for the rest of the year, too.