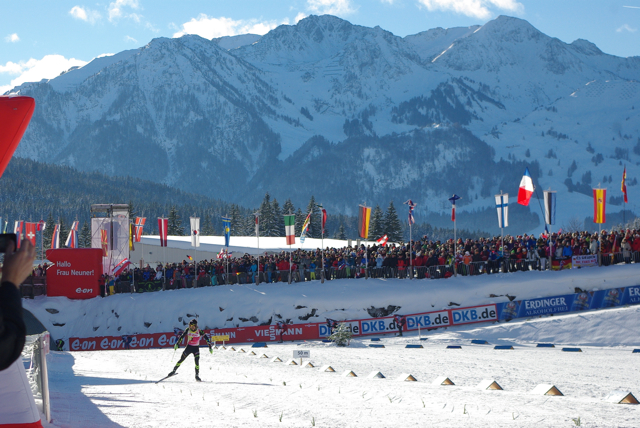 A long time ago, back in December, I visited Austria. I was so busy, drowning in my thesis and also working at World Cup biathlon races while I was there. Then I flitted over to Davos to keep working, more thesis, more World Cup. I never got to write about my time in Austria.

So here it is! My thesis is handed in, I have a bit of a cold so I can’t go skiing today, and so I will write a few words about Hochfilzen. First off, it was amazing how easy the trip was. I hopped on a train in Munich and was soon floating past the Austrian Alps. We went by Kitzbühel, one of those places you hear about over and over again if you pay any attention at all to the alpine ski racing scene. It’s among the most famous destinations in the Alps and the hardest downhill courses on the World Cup. I pretty much never thought I’d go there.

Hochfilzen, my destination, is just a few stops on the train past Kitzbühel. The total travel time was just over two hours. Munich folks, get to this part of the Alps. It’s an easy trip and it’s beautiful. And, unlike much of the Alps at that time, it was snowing, big, glorious dumps of snow! The mountains were actually covered in white, which was a very welcome sight given that most ski races were being held in the middle of brown.

I checked into my little hotel, which was conveniently located just across from a trailhead for the ski tracks. So I gobbled down a sandwich for lunch and immediately headed out. It was my first time on snow all season and it was a joy! There was not so so much snow but enough for a few kilometers of a loop. As always I felt that freedom and exhiliration that comes from having glide, no longer being weighed down by friction or the pause of your feet on the pavement. Snow! What a wonderful thing.

In the next days I went for a few more skis, and Hochfilzen is truly a great place to cross-country ski. The trails connected several little village centers, so it was possible to ski back and forth up the valleys that extend in several directions. Just look at all of this. I didn’t get to explore very much of the total extent of the network. (click to enlarge)

Often I was the only one on these trails (okay, one day it was dumping buckets of snow and the trails hadn’t been groomed, that might be why). With the mountains rising up all around me, I just felt incredible. The Tyrolian Alps aren’t particularly tall – the mountain at Kitzbühel, called Hahnenkamm, is just under 6,000 feet – but they are rocky and craggy and look very epic. You forget that you’re not at a much, much higher elevation.

Another nice thing about Austria is that it’s sort of cheap, at least compared to Munich or Switzerland. I stayed in a quite nice hotel with a wonderful breakfast – I would say the best, except these breakfasts are standard in the alps. Bread, jam, cheese, hams, yogurt and muesli, fruit, you name it. All healthy things, but such a spread that it’s hard not to smile as you get out of bread.

The town of Hochfilzen is very very small (just over 1,000 people – about the size of my hometown of Lyme, and it’s crazy to think of such a place hosting a World Cup), so there wasn’t much to do. I did go out one night for a “business meeting” which devolved into a much less formal situation. The only place we could find to eat and grab a beer was a little smoke-filled bar/restaurant. The food was good, but I left smelling of cigarette smoke.

Another highlight was the fact that I got to spend really a lot of time with my friends on the biathlon team. Hannah, Susan, and Sara were all racing, as well as Annelies and Lanny, who unlike the first three were not my teammates at Dartmouth but whom I’ve gotten to know over the last few years. Twice I went over to their hotel in the evening and just hung out. It was so great to be able to have some unscheduled time with them and just let the conversation wander wherever we wanted it to. It’s very rare that I get to see my American friends when I’m over in Europe, and it’s the same for them. I owe a big thank you to the U.S. team staff who let me waltz in on the team and spend time with them.

Finally, I worked a lot a lot a lot. They were exciting races with beautiful scenery. The only pictures I took were on the race course, but I think that is a great way to show you what this part of Austria is actually like. So, without further ado, here they are! Click any photo to enlarge (better quality!) and start a slideshow you can tab through.