I recently received a great e-mail from my friend Susan. I had been telling her about my rollerski adventure up Fluelapass and she told me, among other things: “I think you are a glutton for punishment.”

This took me a bit by surprise. I’m not going to deny that it might be true, but it was a pretty serious case of the pot calling the kettle black. I know a lot of athletes, a lot of very good ones in a variety of sports, but out of all of them, Susan has the most gut-churning ability to dig deep of anyone I’ve ever met. This is the girl who literally pushed so hard on her bike trying to keep up with the guys that she blacked out and crashed off the road. You will seldom see anyone on the biathlon World Cup who is so willing to go deep, deep into the pain cave as Susan. It is her superpower.

So when someone like that calls you a glutton for punishment… you think, shit? Am I doing something wrong? Am I doing something right? You begin to wonder what, exactly, you are doing with your life – after all, there is no professional reward for such behavior. We “adults” with normal “jobs” (okay, my job barely ever feels like a job) don’t have any reason to attempt stupid feats of athleticism.

But, for some of us, it’s a way of life. It’s true. And some of us understand that. At the end of the work week – or even in the middle – what better way can you satisfy yourself than trying something that requires you to fully test your limits?

This weekend, my friend Rosalie came to visit. She’s living in Bern and I hadn’t seen her in a while, but our lives overlap so much: she’s four years younger than me, but went to the same high school, through the same ski club, to the same college, and knows many of the same people. We’re both deeply interested in environmental issues, although Rosalie has gone admirably further than I have in doing actual on-the-ground research on a bunch of cool topics, including social ones. People sometimes marvel at the way I pick up and move to another new country every few months, but Rosalie is so much more fearless than I am. I’m in a masters program; she has, on her own, landed herself in Rovaniemi, Finland, or in Bern, to do projects that she conceived herself with little to no supervision. And both of us hope to end up writing about these things we care so much about.

She wrote a great blog post about the weekend, starting with a snafu at the train station that left me feeling like the worst host in the world. I was a little late to meet her, and couldn’t find her; the cell number she gave me wasn’t working; after circling the station for 20 minutes, I headed to the other station, where I didn’t find her, and then to the office to see if I had e-mail. Finally I returned to the original station, over an hour after she was supposed to arrive, only to find her there! She had been there the whole time, but we must have each been walking in circles and always on opposite sides of the building. But anyway, we found each other. And the weekend began. 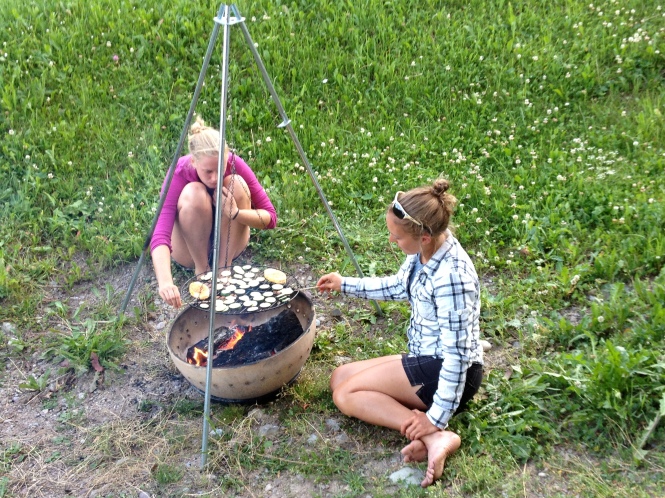 And what a weekend it was. We looked eagerly at maps that first night and decided to hike out the door as much as possible; buses go to cool spots up the valleys, but here in Switzerland, they are expensive. Luckily, I’m housesitting in an amazing location and there’s more than enough terrain out back to keep you occupied for days. So come Saturday morning, we were drinking coffee on the front lawn when my friend and coworker Sofia pulled in on her bike to complete our hiking trio. It turned into a 13-mile day with one continuous 3,000-foot ascent, a lot more smaller and more gradual ones, and some incredible, awesome, unbelievable scenery. We were so tired we soaked our legs in the stream and took a nap before we could muster up the energy to grill up sausages (once again in the front yard) for dinner.

Day two dawned a bit cloudy, and since Rosalie had made me rhubarb crisp for breakfast (ROSALIE YOU ARE AMAZING) we enjoyed a long, relaxing breakfast. I never get to do that during the week – I’m up at 5:30 at the latest, and I have a half hour bike ride before arriving at work by 7. So to have an extra hour to lounge around and talk about interesting, funny, deep, serious matters with a buddy felt like heaven.

We started hiking and we were both tired. But you can’t admit you’re tired, right? My calves were burning but we both pushed on. I had made a grave mistake in my map-reading and it took us over two hours to reach Oberalp, the “start” of our planned hike. But once we were there, things seemed better – we were heading up an incredibly beautiful valley, past idyllic cabins for farmers and shepherds, and cute cows. You know, typical Switzerland stuff. Finally, we reached the last pitch and climbed up to a windy pass. On the other side, we stopped for lunch. It was perfect. We were in the middle of nowhere, seemingly, with towering mountains and snowy glaciers as our backdrop. Life was good.

From there… we descended. Some sketchy loose dirt paths at first, down to the valley floor (still very high actually), then down some sketchy loose singletrack to the next dropoff which happened to be above a tall, Yosemite-esque waterfall, and then down past the waterfall to the hamlet of Sertig. At this point, the watch read about what I had projected for our total hike to take. We were pooped.

I had offered several options for getting home. The first would be to take the bus to Clavadel, but it didn’t go back towards our house, so we’d have to hike a bit from there or else go further and connect to another bus to get home. I also mentioned that we could try to hitchhike to Frauenkirch, but Rosalie vetoed that (probably good, I’m not so adventurous with the hitchhiking). Or we could walk – I estimated that it would take us an hour and a half. As we stared at the bus schedule and tried to decide whether to get on or not, we hesitated. Walking didn’t seem soooo bad. Just an hour and a half. Then, the bus pulled out of the parking lot and left. Too slow. The decision was made for us.

And… it turned out to be much more than an hour and a half of walking. We were in pretty serious bonking territory, armed only with water and a couple of carrots for snacks. By the end, we had to stop and by ice cream at Frauenkirch to make it the final 15 minutes back to the house. When we walked in the driveway, Rosalie checked her Garmin: 18 1/2 miles. We had been out from nine to five, like a regular job. Later, she realized that the GPS didn’t pick up satellites immediately, so it was actually 20 miles.

That certainly justified how exhausted we were.

I am kicking myself for being shitty at reading maps. The main, interesting part of the hike? It was exactly as long as I thought. But the traversing of Rinerhorn to get to the start, and then the long way back from Sertig, wow, I totally blew it there. And we were in for a rough ride because of it.

Yet we each had the chance to bail and take the bus, and we each turned it down. That’s what it means to be a glutton for punishment, I guess. Maybe that makes us bad adventure partners; we’re ambitious and don’t want to admit any little weakness, ever.

But maybe it makes us good partners. We both take responsibility for the crazy situation we got ourselves into, and despite the fatigue we’ve suffered in the few days since (and the fact that I came home and ate everything in the kitchen… really everything….), I think we both have pretty fond memories of Sunday. It was great! It was fun! It was beautiful! Rosalie made a snow angel!

We’re already planning to meet up again, this time in Bern. I may be crazy (my dad told me recently that I “didn’t have to be the ‘crazy American’, you know”), but it feels so amazing to know that I have kindred spirits among my wonderful group of friends, and that we can satiate ourselves with whatever ill-advised physical tests we want. What is better than that?