Where can you possibly start when you are describing something so alive, so full of energy, so frenetic?

I’m here at IBU World Championships in Ruhpolding, Germany, and as the days tick down I can’t imagine how I will ever leave this place. It’s the same feeling I had in Oslo last year, and on that trip I was so overwhelmed that I never even ended up writing about it.

So this time I’m going to try to do better.

I arrived on Wednesday evening, sans ski bag, which however irritating it may have been at least made my train rides a bit easier. I am staying with a wonderful couple: Walter Pichler, a former star biathlete for West Germany who then coached the U.S. team for a decade, and his American wife Pam. Pam immediately made me at home: Anything you see in the cupboards is up for grabs! Do you want some tea? Look, our cats like you!

The Pichlers live just up the hill from town, and that evening I walked downtown to pick up my media credentials. It was immediately clear that this was going to be different than Oslo. Ruhpolding is a small town, of just 7,000 people, but it had to absorb the same amount of publicity and attention as the entire 1.4 million person metro area of Oslo. The town was packed, I mean packed, like sardines with rabid fans. Biathlon is the number one winter sport in Europe and nowhere is it more popular than in Germany.

But it wasn’t just the atmosphere that was different. The IBU is extremely, extremely well-organized and has a lot of money. They also have more rules. I asked whether there were service bibs that members of the media could borrow and ski on the course – we did this in Oslo and it was great – and the man handing out the credentials actually laughed in my face. 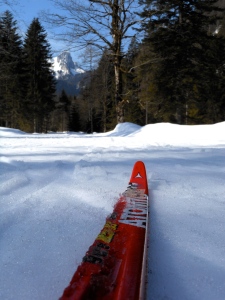 That’s a bummer, because there isn’t as much skiing to be had here, especially since the subtropical temperatures that have hit the area in the last week have made the skiing down in town very crappy. I have skied on the trails across from the venue a bit, but they don’t groom them much because people are here to watch, not to ski, and they use all of their resources for the races. Up the valley is better – I got to do an amazing ski with my old friend and teammate Susan Dunklee – but I don’t have a car, so it’s tough to get up there.

Really, though, the lack of good skiing is the only thing where Oslo is kicking Ruhpolding’s butt. The races have been amazing. There is so much exciting stuff happening that I can’t even start to explain it. And the fans, I must say, are even more loud and crazy than ski fans. Even though attendance is capped at around 30,000 due to the logistical challenges of transporting people up and down the narrow valley to the venue, it doesn’t feel any smaller than when I saw 100,000+ fans in Oslo. When Magdalena Neuner or Andreas Birnbacher comes into the range alone, you could be a mile away and still tell whether they hit their shots – the stadium explodes in a loud “HEI!” – or not. That’s how loud and unified the spectators are.

I’ve been working very hard. This weekend there were two sprints on Saturday, with a total of more than 250 competitors, and two pursuits (capped at 60 apiece) on Sunday. I stayed up until 1 a.m. on Saturday writing four race reports, woke up on Sunday and did a roundup of everything I missed, watched the men’s race and did interviews, then sprinted my way through the men’s report before the women’s race started on Sunday afternoon.

After the women’s race, my productivity took a dip as I had been invited to a U.S. Biathlon Association banquet that evening. I met the team at their hotel and grabbed a drink with Ed Merrens, a friend from the Upper Valley who is here as the U.S. team doctor. Then all of us took a van up to a very fancy Bavarian guesthouse where we met up with the coaches and wax techs, ski reps, foundation members, and a USOC staff member who was attending the Championships. We were served fancy Bavarian food, lots of Prosecco and beer, and treated to accordion music and yodeling. All of the German ski techs as well as the team’s High Performance Director wore leiderhosen. It was fantastic to be able to chat with everyone when I wasn’t working.

I didn’t get home until 11:30, though, and was too exhausted to transcribe another interview or write another race report. I save that up for yesterday, which was supposed to be a day when I had no obligations and could just relax and go for a ski. It was raining when I woke up, so that made it a little easier to abandon my plans and keep working, but it still stung a bit.

In the afternoon I was able to kick back, though, walking into town to see the sights and check out a museum on the history of biathlon in Ruhpolding. It was amazing to look at the old pictures and see how much biathlon has changed. Of course it used to be completely with the classic technique, but that wasn’t the only major difference. Some targets used to have a single black dot. Then there were three. Then there were five, but in an “x” like on a pair of dice. The evolution of the Ruhpolding venue, too, was remarkable. From just a couple of targets in a clearing in the woods, it has evolved into a state-of-the art facility with a large stadium. I saw pictures of the Pichler family chainsawing down trees and moving them in trucks. I saw pictures of heavy equipment installing a bridge.

With only six races remaining, I’m already getting a bit sad about leaving. It’s been great and going back to real life in Oregon will pale in comparison. But instead of thinking about that, I’m just going to enjoy my last days here and make the most of them! 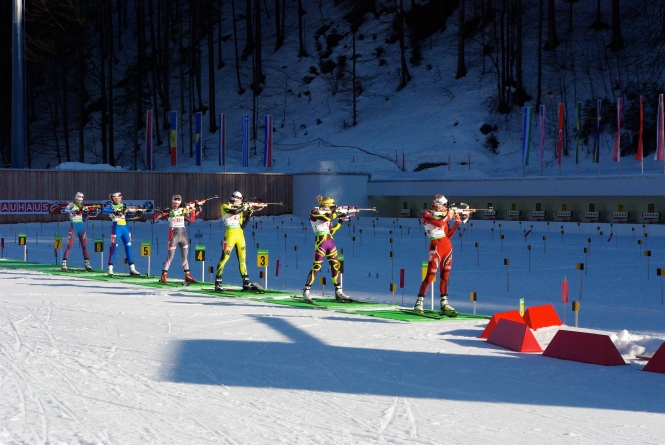