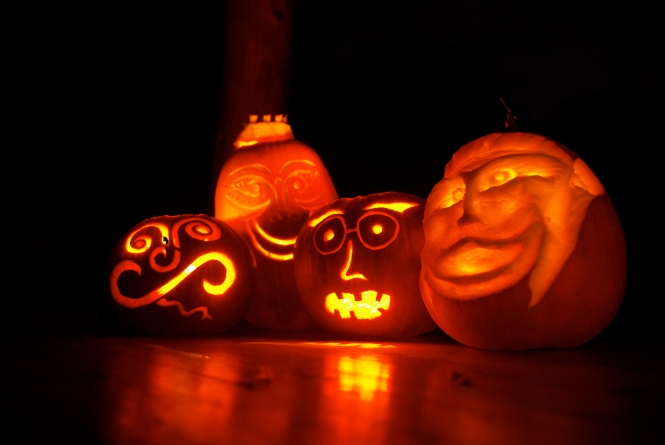 On Sunday night my housemate Heather and the women who lives in our backyard, Elizabeth, wanted to carve pumkins.

First, a little bit about our housing arrangement, which is unusual. Our house is on the edge of the city, definitely still in the neighborhoods but not downtown; as a result our lot has more of a yard than I’d expect. It’s full of berries and fruit trees, and also a pair of yurts where Erik and Elizabeth live. Erik is our landlord’s son and Elizabeth is his girlfriend. They are younger than me but older in a lot of ways too; they work in gardens and on wood and with their hands, don’t have many amenities, and survive almost entirely on cash. This summer they got a truck and were so excited. They don’t pay rent.

The situation is mostly wonderful because Erik and Elizabeth are really nice. Sometimes, it’s strange to have people living in your backyard regardless of how nice they are, though. This weekend Elizabeth was talking about how she wants to get ducks because duck eggs are so good, and I just thought of how I didn’t really want ducks wandering around our yard. I didn’t want to be stepping in duck poo all the time, and I just didn’t want to deal with them. Then I felt bad. That’s the thing about Erik and Elizabeth: whenever they ask you about something, you feel like you have to say yes even if you don’t want to because the idea is so charming and sustainable. You feel like a grouch saying no.

That didn’t come up in our pumpkin-carving evening, though. Because who doesn’t want to carve pumpkins? Elizabeth had dragged Erik to the pumpkin patch and they had each picked out a nice carving pumpkin. Heather, on the other hand, grabbed two smallish pie pumpkins from the supermarket.We figured we could use the pumpkins for pie after we looked at them for a few days. I’m not sure that’s how it works, but we’re going to try.

My other housemate, Laura, wanted to cook up the pumpkin seeds, so Heather and I each took a pumpkin and a few of Erik’s carving tools and the four of us set to work on the floor. It was immediately clear that everyone else was way, way more artistic for me. I briefly thought about doing a jack-o-lantern that wasn’t a face – maybe a tree, or a cat, or a snowflake – but then I thought, who am I kidding? I can’t draw that stuff. Much less carve it. So that was that, I was making a face.

Considering the amount of time I spent on my pumpkin, which was roughly the same amount of time everyone else took, the result was kind of lame. I mean, look at Elizabeth’s pumpkin:

Despite being completely outclasses in the artsy-fartsy department, it was a lot of fun to sit around the floor joking and eating Laura’s delicious pumpkin seeds. We may have been more focused on our designs than we were when we were kids, but we had no less fun. I hadn’t carved a pumpkin in years, but I think I am going to have to make a habit of it again. Especially with friends, it’s a nice way to do something fall-like!

Although hopefully my jack-o-lanterns will get more ornate if I keep practicing…. although this fellow does have a bit of his own charm.