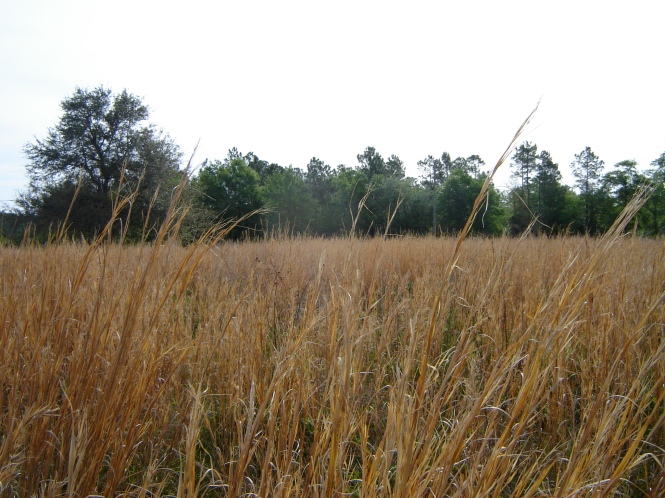 This is a field of broomsedge.

In the last week, I made two day trips up to this field, which happens to be in Jay, Florida, about an hour north of our place in Navarre. The drive up to Milton is pretty in a way that I always assumed Florida could be, but hadn’t seen yet – quiet! Trees on the side of the road! Rivers meandering languidly through the forest! Milton itself, which you pass through before reaching Jay, is a cute historical town of brick buildings and character. I saw advertisements for a farmer’s market and cursed the 20 miles separating me from fresh vegetables.

Back to the broomsedge. It’s not actually a sedge, but rather a bluestem, a member of the Poaceae  family. It grows to about a meter tall, or sometimes even taller. It was historically used to make brooms, hence the name. Broomsedge grows well on poor soils and comes back quickly after burns, of which there are plenty on the Florida panhandle. This characteristic has made it invasive in Hawaii and weedy in California, but in the southeast, it’s right at home.

Imagine yourself in this large field of broomsedge, which has turned straw-colored. It’s early morning and the grass is bathed in the sun’s rays and framed by a few tall, green trees.

Now imagine yourself pulling up this broomsedge, one clump at a time. For hours. When you’re done, there will be a large empty spot in the field. If you look in one direction, the sun, now high in the sky, will be beating down on the yellowy stalks. In another will be the void you have created, with a large pile in the middle. Your back will ache, your fingers will be blistered, and you will be covered head-to-toe, even under your clothes, in a layer of black soil. You will look like you’re returning from a coal mine.

This is how our work trips were. I listened to NPR podcasts to pass the time and drifted off into my own little world, where all I focused on was pulling one handful of grass after another. I lost track of my boss and coworkers, and lost track of time. The hours seemed like an eternity and yet I was surprised when it was already time to eat my peanut butter and jelly sandwich.

We pulled up several truckloads of broomsedge and transported it back to the island, where we plant it in the sand.

After a morning spent inland, being back on the beach was a shock. A bright, reflective shock. The sand was so white it almost seemed sterile, while the ocean was an impossible shade of blue. The colors of this beach are some of my favorites, but the landscape seemed static after a morning spent in another ecosystem.

Today, I finished my 25th consecutive day of work. Only two of them were pulling broomsedge, but at least a dozen were planting it. Now, I am done with both tasks. We have a lot of work still ahead of us, but rearranging the distribution of one of the southeast’s characteristic plants won’t be part of it.

I have an entire week off as a thank-you for my work, and I’ll spend it in Atlanta, Georgia and Santa Rosa Beach, just down the panhandle. I can’t wait for a little R&R and a trip to see my wonderful grandparents.