This has been a pretty busy week for us, with the Regional Elite Group camp in town and it being a speed week to boot.  Even after the time trials we did with the juniors, we have another coming up on Saturday. I had pretty much put my head down and figured I was in it for the long haul when I got an e-mail from my friend Andrew McCauley, asking if I wanted to go hiking because he had quit his job(!).

After much hemming and hawing – a long hike is decidedly NOT the best thing to do in between a bunch of time trials, and I knew Pepa would be mad – I decided that this was an opportunity not to be missed. A hike? In the Whites? With a friend? Awesome! We decided to do Kinsman Ridge, from south to north, because it’s the only ridge that Andrew hadn’t hiked all in one go, and I had never been to the top of Cannon. More importantly, it would be long, and hard, and that’s generally what we look for in a hike. I was psyched.

Andrew had a job interview in southern NH on Thursday morning, and so it came to be that he arrived at the Lafayette Place parking lot at 10:45 in a dress shirt, khakis, and leather shoes. Ha! This was soon remedied and we were heading south to Kinsman Notch to start our hike.

It is almost ten miles from Kinsman Notch to the Eliza Brook Shelter, but it is the easiest part of the hike and we cruised along, catching up. I am embarrassed to say that although we have been great hiking buddies in the past, we hadn’t actually seen each other since graduation a year ago. It was great to chat and the miles passed easily. 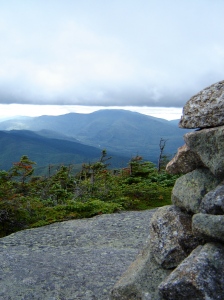 Mt Moosilauke hulking in the distance.

I was so incredibly happy to be in the mountains with a friend. I was rejuvenated, mentally, spiritually, whatever, even though I was tired and my legs hurt from all the hard training I had been doing earlier in the week.

We stopped for lunch a bit before Eliza Brook on some sunny rocks. Little did we know it would be the sunniest, nicest view we had for the rest of the hike – things were moving in and out of rain showers and the sun. We ate our crummy lunches – mine a PB&J, Andrew’s a bagel, hooray for unemployment – and I lay back on a rock to soak up some Vitamin D.

After some hard climbing up one of those rock piles that passes for a trail, we reached South Kinsman, the first peak of the day even though we’d already been hiking for several hours.

Unfortunately, the elevation gave us a chance to see the weather that was coming our way, which was rain. I put on my raincoat and we headed off into the clouds.

I thought that since we’d reached the first peak, the rest of the hike would be easier – after all, we were already up high, right? How hard could it be to traverse the ridge?

Of course, I had forgotten that the ridge in question was Kinsman. It wasn’t too hard to reach North Kinsman (no view this time), but then things got tougher. For one thing, continuing along the ridge meant leaving the Appalachian Trail, and the trail became narrower and bit less maintained. For another, we were all of a sudden going steeply uphill and downhill. The next 3.2 miles took what seemed like forever.

Plus, it started really raining. Not just drizzling, but raining. The last mile to the top of Cannon Mountain went more quickly, but I was getting cold. I climbed the fire tower just because it was my first time up Cannon, but there was zero visibility, and we were exposed to the wind. So down we went.

We decided to take the Hi-Cannon Trail down instead of heading back to Lonesome Lake. The first mile was really hard, and, as I said, “Hour six: Andrew and Chelsea get grumpy.” We were walking down steep, wet slabs of rock, in the rain, and my fingers were going numb. If I had slipped and fallen, I’m not sure my hands would have been much use. Plus, we regularly looked ahead of us to see steep drop-offs into the mist…. nobody wants to fall off a cliff.

The bottom of the trail was much nicer though, dirt switchbacks which we were able to speed along. By the time we reached the car, I wasn’t even cold, and I was back to being happy again.

In fact, I soon forgot how cold I had been, and how much I had longed for dry clothes and hot chocolate. I seldom hike unless it is long and hard, and the key to wanting to go hiking again is to quickly block out the unpleasant parts. Plus, it had been a long time since I’d been in the mountains, and my pure joy easily overrode the grumpy parts.

We hopped in my car to go pick up Andrew’s car at Kinsman Notch, and then grabbed McDonalds in Lincoln for dinner. It was my first bit of fast food in quite some time. After a long day on the trail, anything tastes good, and prospect of getting a burger and fries for $2 is always alluring. I’m ashamed of myself.

We said our goodbyes and drove off our separate ways, me north to Vermont, him south to Massachusetts. I was sad, driving away, because I had enjoyed the company, the mountains, and a day of freedom from my regular obligations.

As I headed back toward Franconia Notch, though, my spirits were lifted by a beautiful sunset. The clouds were drifting and spinning over the Cannon cliffs, lit up orange and pink by the setting sun. 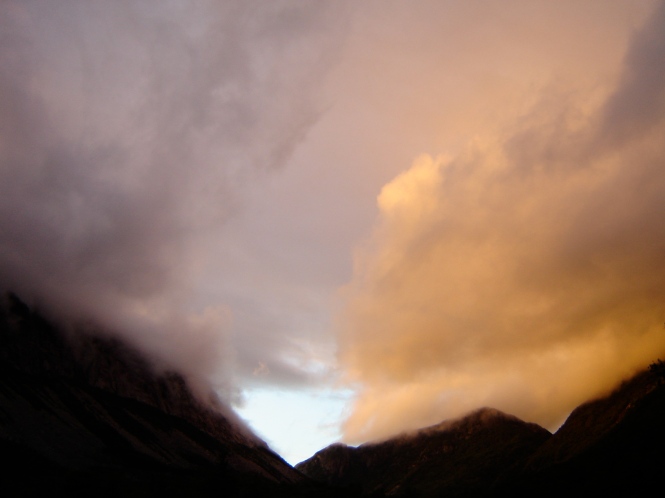 What a wonderful way to end a wonderful day. I drove back to the Kingdom still a bit sad, but in peace.